It was the first unplanned country on our route. After some days in Ukraine, Romania seemed a good idea to continue our travel. My old never used guide of this country was lying on a shelf at home, as when we were leaving to Ukraine we were actually thinking of going north, to see Lithuania or Latvia. But on the way to Lithuania stood Belarus and we didn’t have time to wait for the visas. So why not Romania. One day before leaving Ukraine I wrote to my Romanian friend Corina  that we urgently need some recommendations for the north Romania. She quickly gave me a list of places worth visiting and literally after a couple of minutes in front of the computer and after downloading Romanian maps to my phone we left in direction of Romania.

After an incredibly long and bumpy Ukrainian road we saw a bridge signalizing the border. It was already late, and there was almost nobody on the border crossing. Customs officer welcomed us with “buona sera”, which made us wonder if he had though we are Italian or maybe the romanian language is so similar to Italian. We knew that romanian belongs to the same language group as Italian, Portuguese or Spanish, but when we saw some information posts Renato had a blast that, although he was somewhere in the east, further even than Poland, he could still understand the local language pretty well. Written at least, as we realized later, but still.

Right after the border, on the verge of the first Romanian town Sighetu Marmatiei, we had our hotel booked. We chose it mainly because of its name, Dupa Apa La Razvan (dupa means ass in Polish), name that made me laugh until morning.

In the morning we came back to the Sighetu town for have breakfast, we walked around the not really interesting center and we started looking for the  Memorial of the Victims of Communism and of the Resistance. We thought it is going to be only a statue, but we ended up in a huge museum created in an old prison. It was officially called “unit of special labor”, but it was simply a place of extermination of the then present intellectual elite of the country who didn’t agree with the new regime. It’s an overwhelming place, but beautifully commemorated, especially with a small concrete chapel surrounded by a wall with thousands of names of all the victims and an interesting monument on the other side of the yard. 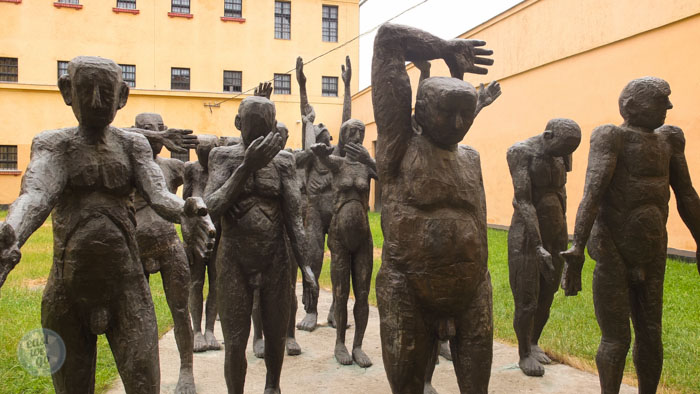 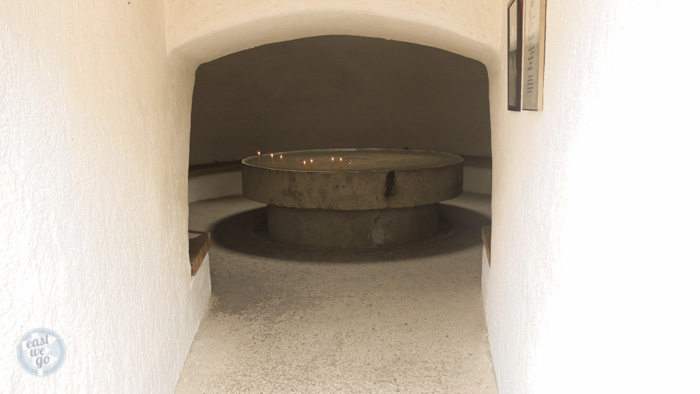 The next places was like taken from a fairy tale. Far, far away, in the middle of nothing, between fields, village houses and horse carriages there is a unique blue cemetery. No solemnity, gloomy gray tombstones or black metal crosses. Instead, colorful wooden crosses with a board with a painting showing the deceased and a short text about his or her life. The idea of Merry Cemetery (Cimitirul Vesel) was created in 1935 when a local artist Stan Ioan Pătraș make a funny epitaph. Since then the tradition is continued by his student who carves the cross and writes a short, sometimes humorous anecdote about the life or death of the deceased. One of the funniest talks about taking pleasure in drinking alcohol, hate to a mother-in-law, a lightning striking the top of somebody’s head, etc. It’s a pity though that everything is in Romanian and there are no translations, so in the cemetery I had to eavesdrop from some Romanian guy who was translating to English the text to some friend. All the graves make up a truly unique chronicle of the local people, with a drop of humour, but also lots of respect and remembrance. 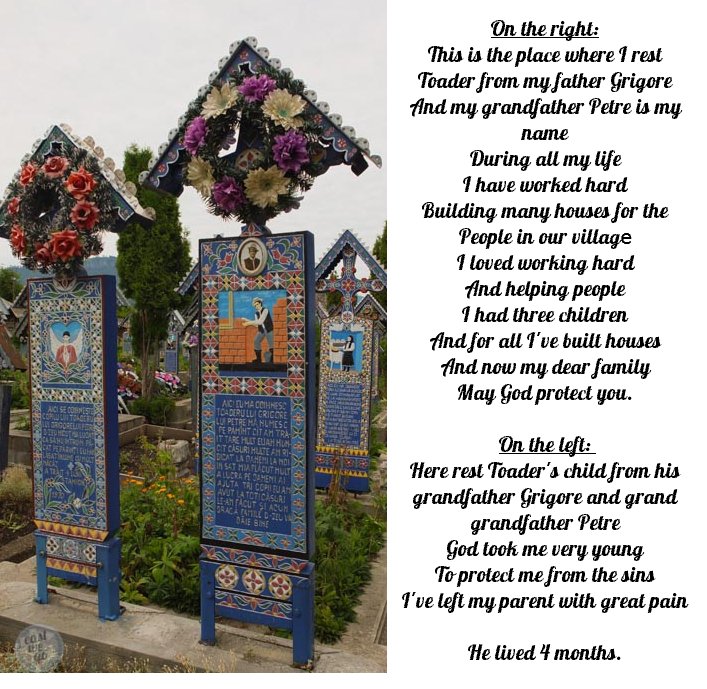 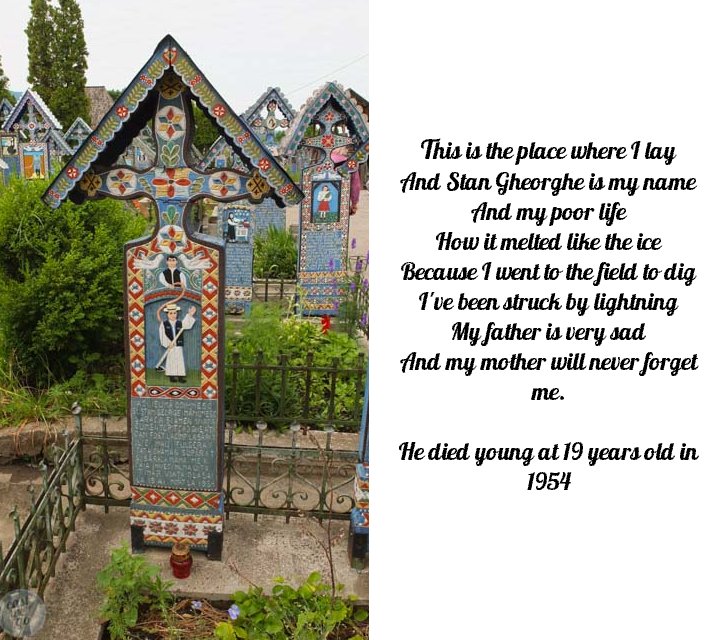 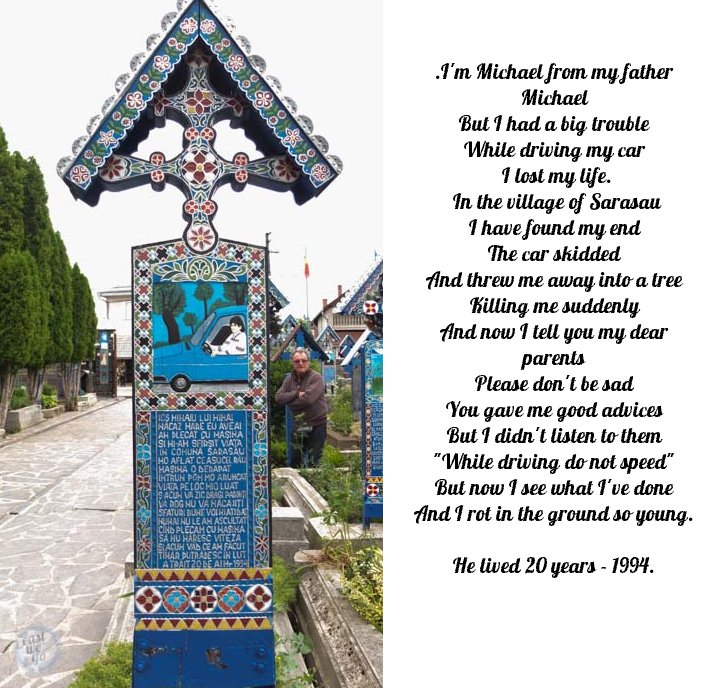 I’m not sure if I should write about the next place, because, first,  I am a bit embarrassed, and second, I can’t forgive myself what we didn’t go a bit further.I’m talking about a place called Barsana, and the local monastery. As I said before, we were visiting Romania with a guide on a shelf at home, so we had only a list of places to visit scribbled on a piece of paper (actually written on a notepad on my phone, that’s how modern I am:) ). There was one name “beautiful church in Barsana”. GPS found the location and so we left. On the way however, we got lost, because there weren’t many signs around. In the end we parked in somebody’s yard and climbed the stairs up to the church. Well, it really was charming, but unfortunately closed. We found a signpost confirming that it is listed by UNESCO, yet we still had a strange feeling that it is not all, that one church is too little. But we here in hurry, so we went back to the main road and headed south to CLuj-Napoca. As we found out later on, we missed a nice monastery with a couple of wooden beautiful buildings. Well, at least we have something left for the next time. 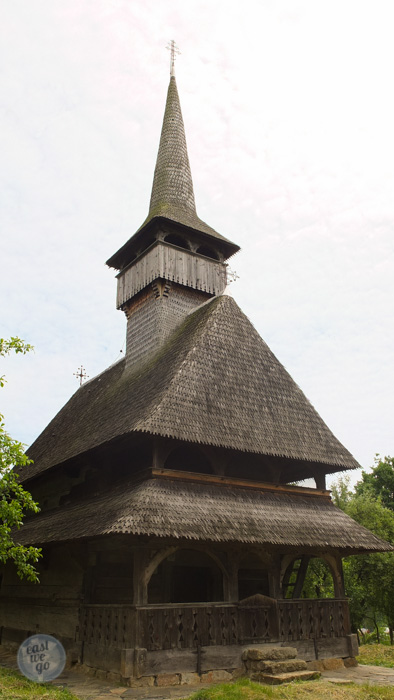 The road to Cluj was really pleasant, we went a bit through the mountains and a bit through the valleys, passing by herds of sheep and little villages. A few kilometers before the city we stopped by to book a hotel. As we found out, Romania wasn’t cheap at Ukraine anymore, so we found a room a bit further from the center. 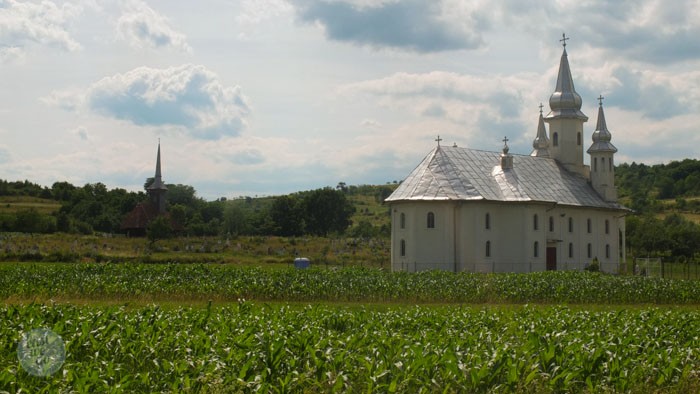 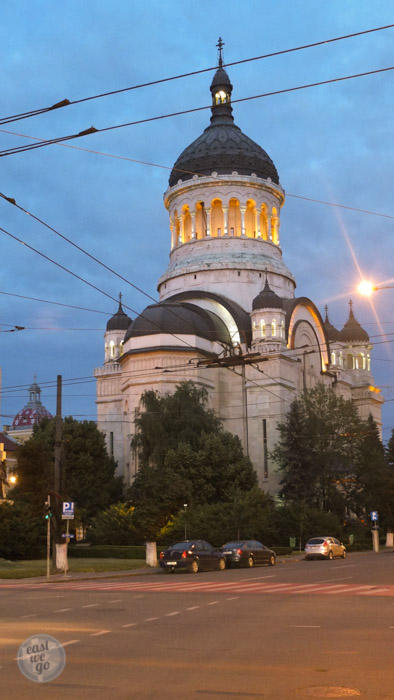 Cluj surprised me with wonderful fin de siècle buildings, huge churches and the amount of bars and young people on the streets. But about this and about escaping a closed room I will write soon in the next post.

travel 2015-07-08
Magda
Previous: Transalpina: A ride in the King’s Road
Next: 3 off-the-guide places in Cracow